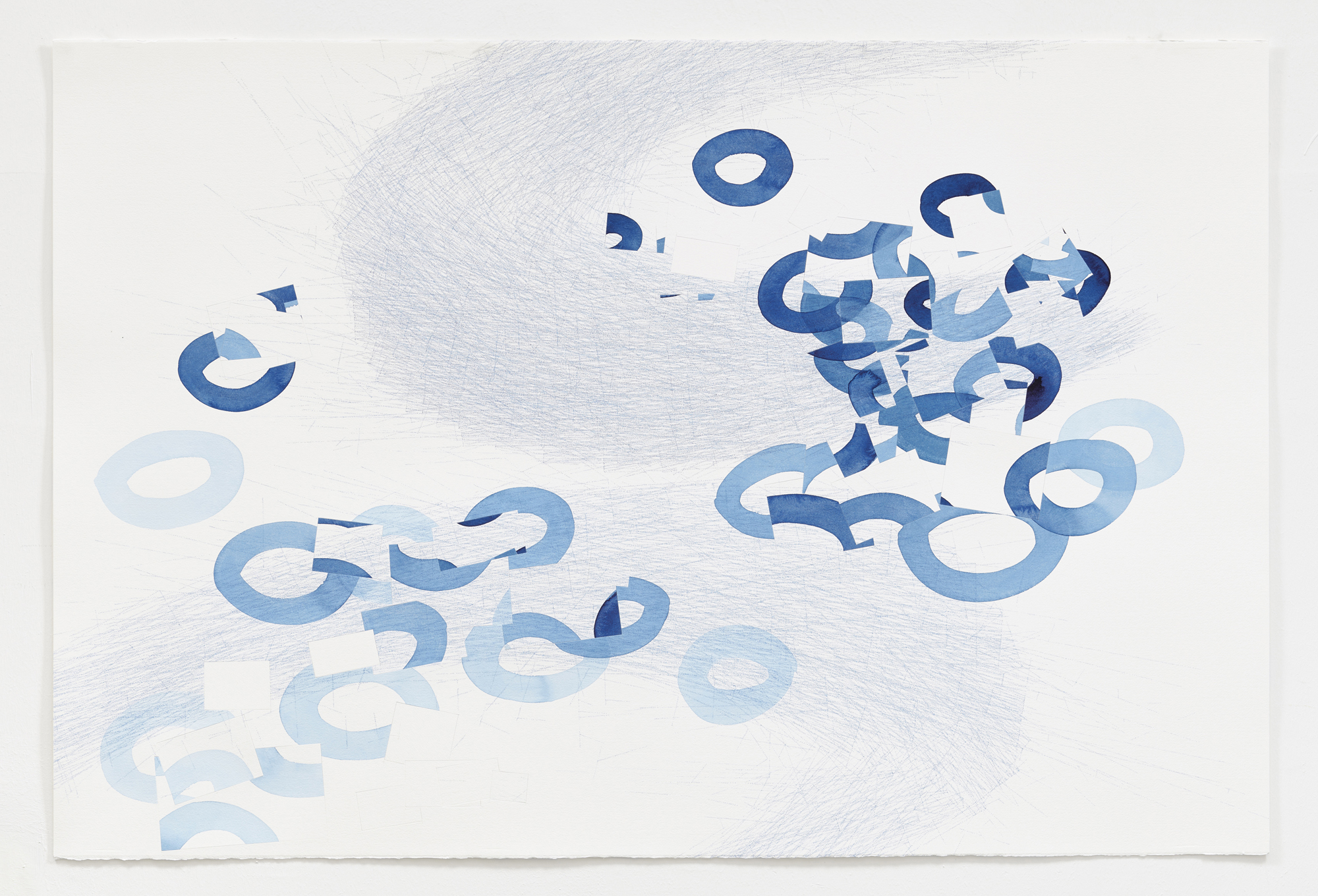 Pencil on paper – this drawing technique, overall one of the simplest, clearest, and oldest, lies at the core of the work of Andrea Roozen. Drawing with pencil is a constant source of wonderment for this artist, and is consequently time and again the object of artistic experimentation. Thus, in the series “Tweening” she draws with a graphite pencil mounted on a drill, or in her works with the title “C-Point”, flattens broken and partly pulverized pencil leads into the paper’s surface with an intaglio press. Or, she’ll photograph a tiny facet of graphite on paper and abstract it through a severe enlargement, whereby it appears as though it were a barren landscape from a distant planet. Roozen’s inquiry into the process and material of drawing is generally carried out through extensive series, each differentiated through self-imposed formal rules. “To Bend” is a very good example of this; a series which distinguishes itself through a clear, thoroughly suggestive pictorial structure and which, with differentiated means, investigates the relation between surface and imaginary pictorial space. The rationale of these works consists in dividing the surface of the paper, with the help of a long guideline fixed on a pivotal point, into narrow segments like slices of cake, and then filling them in, one after the other, according to a previously determined “rule”. At the start, the midpoint was always identical with the mathematical middle of the page, so that an optical alignment forms; a thoroughly hypnotic pull towards the center, at which point – depending on the composition – all pictorial information appears to collapse inwards or alternately radiate outward. Later arose surfaces with eccentrically placed pivotal points; some even located well off the surface of the paper. The filling-in of extremely narrow areas can occur with delicate pencil lines, with thickly arranged, powerful and roughly right-angled wads of lines, or also in an intuitive exchange of dark sections and white voids, all of which amount to a disconcerting fabric of varied rhythms and patterns, consistently interrupting and reordering. As clear as these rules are, the concrete execution by hand is no mere mechanical act, rather it leaves enough place for exhilarating differentiations, deviations, value fluctuations, and so on. Depending on the concrete execution, a deeper or flatter illusionistic space is formed. Abraded by countless marks of the pencil, the middle seems like a black hole or a dark source of radiation that dominates all of the pictorial events. The title “To Bend” alludes to the fact that the imaginary space is touched all around and thereby simultaneously curved and contorted, whereby a profound pull grows in some images that is at times reminiscent of utopian architecture. Thus, if as a viewer one indulges in the undertow-effect of these images it’s a thoroughly shocking moment when, upon approaching them, one suddenly observes the spatial effect break down, revealing the material basis as such: pencil on paper.

Upon first glance, everything about the drawings of Nelleke Beltjens seems different from those of Alexandra Roozen. Here, color comes into play, there is no mid-point, no centralization of the page; moreover the color-stroke-combinations appear to be determined by a confusing equivalence of all possible directional gradients, a scattering and swirling of countless small strokes and fragmented surfaces. The one constant rule exhibited by Nelleke Beltjens is visible in the nature of the stroke with black or colored ink, which she always draws – staccato-like – along the guiding edge of a sheet of paper, thereby dissolving each line into a multitude of fragmented strokes. Thus, absolute particle showers of countless numbers of these marks hurtle over the image surface in antidromic directions, always abruptly interrupted by hard, actual cut edges in the paper, since, as a further formal element, the artist has decided to always work simultaneously upon two image surfaces, in the process cutting out two identically sized sections at one time and exchanging them with one another. These sections can then be completely dissected numerous times again and then disaggregated into fragments of fragments, and so on. The topography of the drawing surface is thus fractured numerous times, and through this dislocation, the surfaces are stirred in a bewildering manner. The title of the newest series, “I dreamt I was sleeping”, gives this comingling of the planes a certain semantic resonance: the complex overlay of different layers of consciousness. Typical for this series is the motif of differently sized rings of blue watercolor of varied intensity. One thinks involuntarily of ripples spreading over the surface of a body of water – it’s no accident that water is a well-known metaphor for the unconscious alluded to in the title. The fragmentation of the perfect self-enclosed ring-form, perceivable although no longer fully realized, in interplay with the drawn and cut elements, points to a permanent movement of present collective events; a simultaneous play running on all levels, of formation and decomposition, of becoming and decay, of flow and stagnation. Classical pictorial concepts such as composition, spatial unity, figure-ground, and so on are thereby annulled; the drawings are settled rather in an indeterminate, dynamic state between formal dissolution and regeneration.

Thus, the drawings of Nelleke Beltjens generate an interesting counterpoint to Alexandra Roozen’s “To Bend” series. In these, the attention of the viewer is focused on the center of the image. For the viewer, this center stands as the point of cohesion for the composition; simultaneously as a sign of the ego become manifest, and alternately as analogous to the function of the vanishing-point in classical one-point perspective. With Nelleke Beltjens, however, the viewer’s attention is dispersed; mitigating any attempt to develop an image center or a center of attention. It is precisely in their differences that a coordination obtains between the artistic approaches of these two Dutch artists. In their dichotomy – centrality versus decentralization, focus versus fragmentation – their respective distinctiveness is reciprocally increased. Both approaches are far from being merely “abstract art”, a noncommittal game of non-objective form, rather they prove to be very considered demonstrations of an intensive confrontation with questions of seeing, perception, and a recognition of the world relations of the observing consciousness in all their complexity and inconsistency: by both the bounded surface of a drawing is expanded into a space of consciousness.

Previous Worlds Within
Next FLOWS AND INTERRUPTIONS

What does it mean to orient oneself in drawing?