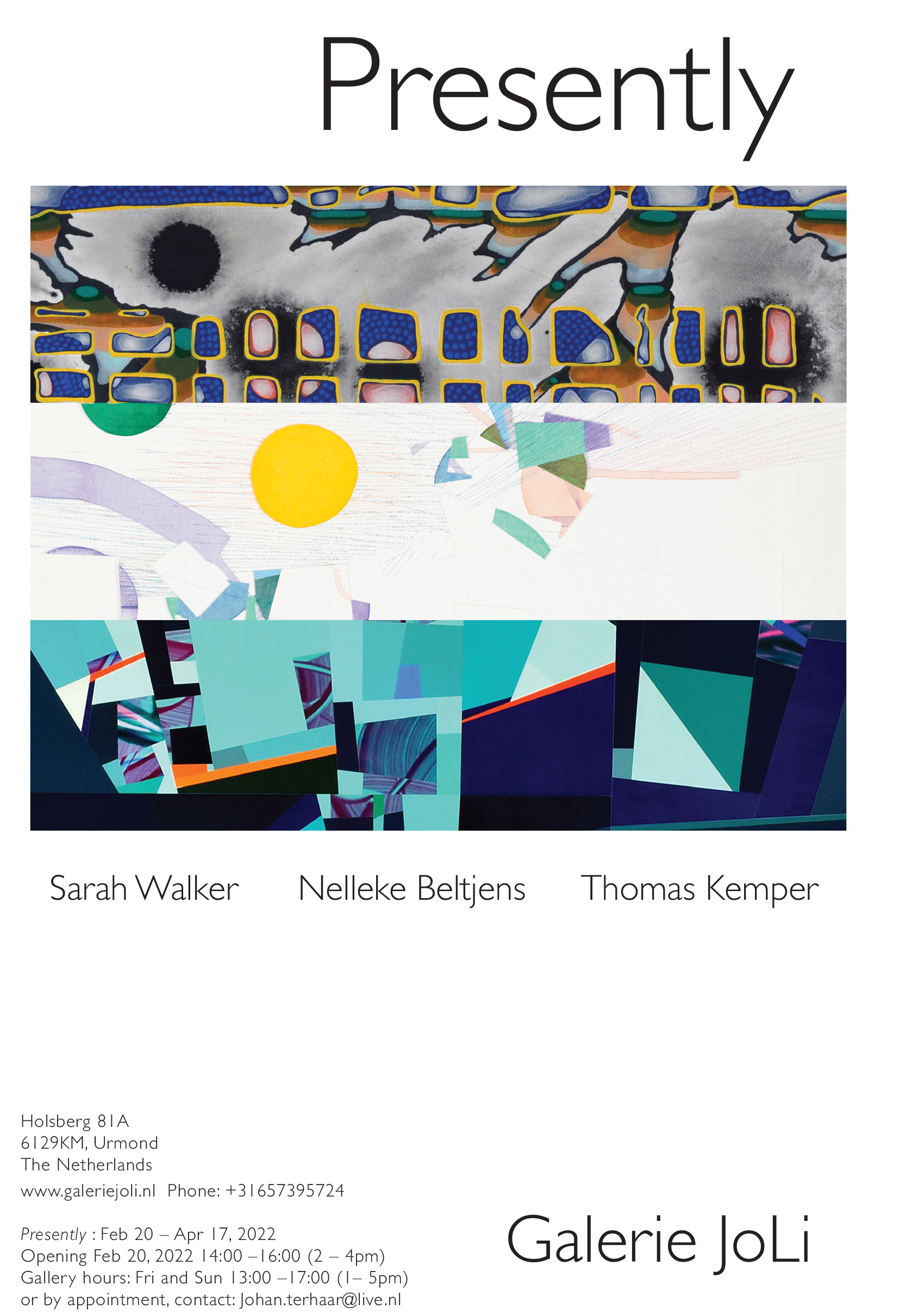 Even a superficial glance at the works of Sarah Walker, Nelleke Beltjens, and Thomas Kemper reveals clear differences between them in terms of technique and formal language. Over many years, the three artists have each developed their own conceptions of pictoriality and corresponding artistic procedures. The three personal styles prove to be so original that there is certainly no danger of confusion among them. It is all the more astonishing to see how well these three positions nevertheless work together in the exhibition “Presently”, how perfectly they complement and confirm each other. The reasons for this are manifold; the most striking, immediately eye-catching cause is certainly the fact that all three artists favor pictorial solutions of high complexity. Anyone who delves into Sarah Walker’s (actual or apparent) square picture fields will inevitably fall into a hypnotic maelstrom resulting from the profusion of shapes and colors, small-scale structures, contradictory hints of spatiality, of symmetries and symmetry breaks. This not only challenges the viewer’s vision to the utmost, but also his ability to associate and his imagination. In Nelleke Beltjens’ new series “Suns and Moons of All Times”, the circular, watercolored color surfaces, which float weightlessly like celestial bodies in the white (imaginary) space of the paintings, are flanked or even traversed by countless strokes lined up staccato-like. In addition, there are countless cuts that let the attentive viewer know that a multitude of fragments have been cut out of the paper and displaced. In fact, each of the five works in the series carries elements of the other four, which have been exchanged among themselves in an intricate metabolic process. Thomas Kemper’s works also prove to be visually exceedingly intricate. Most striking is the constant rhythmic alternation between monochrome surfaces and sections that suggest openness, dynamism, and spatiality. With their contrasts and the play of continuity and discontinuity of colors and forms, they create a confusing pictorial spatiality that jumps back and forth, setting the viewer’s gaze in unfinishable motion. His works, which are made with oil paint and alkyd and also involve cutting up and recomposition, stand, as it were, as an intermediary between the painting of Sarah Walker and the drawings of Nelleke Beltjens.

What perhaps connects the works of the three artists even more than their penchant for complex pictorial orders is their processual way of working. They all do not work according to preconceived plans and pre-sketched ideas, but leave themselves to a protracted process with an open outcome. This attitude is somewhat comparable to the game of chess: every decision, every change to the picture modifies the current whole and necessitates another “move” that responds appropriately – and so on. Since the decisions are usually irreversible, this requires circumspection, a close observation of the given condition and a high degree of intuition. Thus a work develops step by step, enriches itself with complexity and thereby with decision possibilities, until at some point a condition is reached, which proves to be stringent and with which further work promises no more increase or improvement.

This way of working is at least partially comprehensible to the attentive observer. One can see very clearly how Sarah Walker’s paintings are built up from many layers, how she has left certain parts standing, but painted over others, so that an exuberant, constructive-destructive spatial structure has built up. In the case of Nelleke Beltjens, it is above all the cuts and dislocations that, once perceived, convey a sense of her lengthy, meticulous working method of construction and dislocation. And in the case of Thomas Kemper, the extremely precise arrangement of the cut fragments, from which his irregular works are built up, pushing in all directions at once, bursting the traditional rectangular picture format, catches the eye.

The processual working method of the three artists also suggests something like a work ethic.

For anyone who develops his picture in a complex, complicated process of development, guided by what Wassily Kandinsky once aptly described as “inner necessity,” must both assume responsibility for his work – the individual “traits” cannot be taken back, there is practically no correction possible here – and have confidence. What is meant is the confidence that a coherent, valid work will finally result from the many decisions that are each necessary in themselves, even if there is no possibility of anticipating the final result in any way. At this point the title “Presently” becomes understandable: in each present moment it is necessary to make decisions, to take the next step – until the one realization has emerged from the infinite abundance of possibilities. In the respective moment of contemplation, this process then comes alive once again and is actualized as an aesthetic experience.