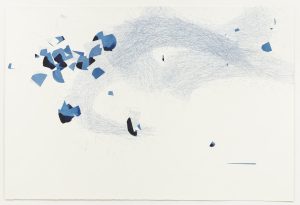 Galerie Christian Lethert is pleased to present the exhibition Worlds Within, which combines new drawings by Dutch artist Nelleke Beltjensand for the very first time paintings by Natascha Schmitten. Each in their own way create multi-faceted works which contain constantly variable and open pictorial spaces that brush existing worlds and explore new ones.

“Over the last decade Nelleke Beltjens‘ foundational inscriptive mark has been the partial line. Notched along the edge of a guiding piece of cardstock, these agglomerated line fragments immanently invoke the contradictory duality of presence and absence. More recently, Beltjens has extended her interest in the cut into a quite literal strategy of incision and exchange. Small sections are excised from the surface of one drawing while an identically sized fragment is cut from a second surface. The two fragments are then exchanged, creating a topographical upheaval between the surfaces of several drawings, which are now indelibly linked. […]
It is of course obvious that ‘new worlds’, at least as we understand them, are possible through the (re)organization of what exists. But to decide implies the imposition of a fiction, a ‘necessary illusion’ that enables our finite perceptions to gain purchase on potentiality. The title of Beltjens’ most recent series of works, “it happens” – a phrase which evokes a certain loss of control – alludes to the embarrassment of this situation, that is, the threat of the fiction being revealed as such.” (excerpt from a text by Rollin Beamish)

For her expressive paintings Natascha Schmitten uses nylon, a silky, semi-transparent material, as her main picture carrier. With every brush stroke Schmitten questions the relationship between light and the possibilities of its representation. Out of multiple translucent coatings of ink and oil color she creates light-flooded pictorial spaces. The transparencies and subtle traces vaguely presage a kind of figuration, like in the exhibited work Pellucid (2016). The discrepancy between the lack of a distinctly perceptible subject and the impression that the paintings refer to the visible world evokes an exceptional tension. Schmitten likes to confront the viewer with aspects of alienation and interferences to provoke different perceptions und imaginations. According to that, the title Alias (2016) Schmitten gave to one of her new works, refers to the fact that there is more than one world and more than one truth, which can be explored beneath the surface of her painting. A kind of permeable veil seems to combine the different worlds within her works, thus creating entirely new ones.

The exhibition Worlds Within presents two artists who convince with analytical and idiosyncratic approaches to drawing and painting and by using a form of opening which leads to new possibilities and movement.

Nelleke Beltjens, born 1974 in Roermond, The Netherlands, studied at the Academie voor Beeldende Vorming in Tilburg, at the Northern Illinois University in DeKalb as well as at the University of California in Davis. Beltjens lives and works in the USA and Europe and presents her works worldwide.

Natascha Schmitten, born 1986 in Bonn, Germany, studied from 2006 – 2014 at the Kunstakademie Düsseldorf under Prof. Siegfried Anzinger. In 2010 she received the Max-Ernst-Fellowship and exhibits her work throughout Europe.

Previous FUNDAMENTAL
Next Flows and Interruptions